One of the reasons why Australia has the fastest growing obesity rate in the world is the portion sizes.

I have been living in various parts of Asia for a few years and what I noticed upon returning to Australia and eating out is the sheer size of the portions. In the first week I ate breakfast out a number of times and was almost put off by the meal staring back at me from my plate – it could have fed a Thai family for a day!

In fact, being the pragmatist that I am, instead of eating till I burst (or bursting 20 minutes later when your true level of satiety reveals itself), I took half of it home and added some salad mix, olives, and avocado and had it for dinner.

Australians are eating out more than ever before, and these large portion sizes are becoming normalized and copied at home. If you are from a generation where you were taught to eat everything on your plate before you leave the table, then you can see that this is a recipe for a disaster.

When I was living in Bangkok I often observed Thais in Western Restaurants sharing two meals between three-four people. And these meals were not even the supersized meals that we have here. Some meal sizes in Australia could be halved, especially for women, and the price lowered – benefiting both our waistline and budget.

Have you noticed that restaurant meals often don’t include vegetables?  You have to buy them as an extra. Some people forego paying extra for greens, either to reduce costs or the meal size. What we need to aim for is the well-balanced meal. A good rule is that half the plate is filled with nutritious low-calorie vegetables.

Take French food, it can be very rich but the sizes are small. The larger meals are often preceded by a bitter salad which not only helps to fill you up, but the bitterness helps to kick start your digestive enzymes improving your overall ability to digest the food.

Don’t get me wrong, I love food but large portions are one of the main causes of being overweight. And it’s not just the meal size, but the snacks and drinks as well. Think about the popcorn containers at the cinema, as well as the size of juice and coffee cups. All of these contribute to increasing obesity rates. 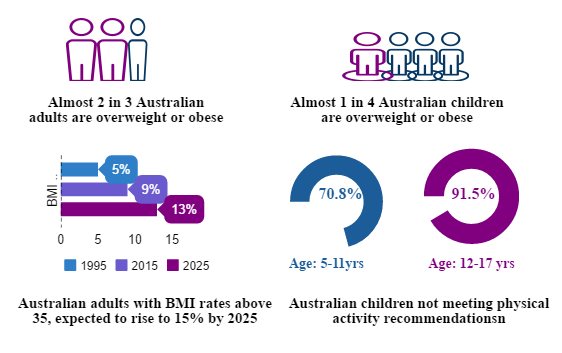 According to the latest study published in the medical journal, The Lancet, almost a quarter of the country’s children and 63 percent of the adult population are overweight. And Australia’s obesity rates are climbing faster than any other country in the World.  This is not a race we want to win!

If you like to lose weight and get healthy in 2017.  Take advantage of a free 15-minute strategy session to learn more about my easy step-by-step guide for permanent weight loss. You have nothing to lose but weight!